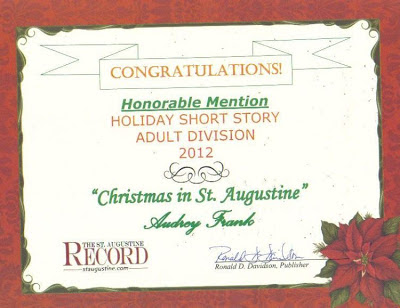 Excited to have placed as an Honorable Mention in the 2012 "Christmas in St. Augustine" Holiday Short Story contest held by the St. Augustine Record. There were two categories, adult and youth. Stories were limited to 500 words.
Winning entries were printed in the Christmas Day edition of The Record.

My story is below. I hope you enjoy it!

It was a cold and dreary night and I was alone. Even the lights in the Plaza, as I came out of midnight Mass, didn't cheer me up. It was the second year I had been a widow. My children lived too far away for a Christmas visit and so, what should have been a joyous night, had turned into my own “pity party”. I started to walk to my car when an elderly gentleman with a short white beard waved at me as he came out of the Cathedral.
“Excuse me for approaching you this way, but I watched you during Mass. You looked so sad. Is there anything I could do to help?”
I explained how I felt and he smiled, his eyes twinkling.
“Could I at least offer you a cup of coffee at the Pub around the corner? That's about the only place open this late.”
Why not? I thought. Maybe a little conversation would lighten my mood.
When we were settled inside, hot black coffee warming me, he asked how long I had lived in St. Augustine. I explained that when my husband died, I decided to move here just a year ago. I had opened a small store on Aviles, lived above it, and rarely had time for just old-fashioned sight-seeing.
“I've lived here all my life. Do you like Christmas lights? I know all the people with houses that are magnificently decorated. Would you trust me to drive you around and look at them?”
I hesitated only a moment before accepting this stranger's invitation. He didn't look like the type who would attack me, so why not take a chance? I needed something and Christmas lights were always my favorites. He pointed to his car and held my elbow as we crossed the street. We were off and running. I hadn't realized how many different areas there were in St. Augustine.
We wove through back streets where he pointed out certain houses. The old Victorian houses sparkled like gems. He explained about the people who lived there. Some were his close friends. I laughed at the stories he told me about his youth. St. Augustine wasn't such a tourist town when he was a teenager, at least not by today's standards.
“We didn't have the traffic problem we have today,” he explained. “I could ride my Schwinn all over town without worrying about being hit by a car. Look over there. Magnificent, isn't she?”
I turned to look at where he was pointing. A large schooner was anchored in the bay. Its sails gleamed with white lights. A Christmas tree was decorated on the deck.
We drove around town for over two hours. When he finally dropped me back at my car, I glanced at the Plaza. Yes, Christmas was here and I felt the glory of it all around me. 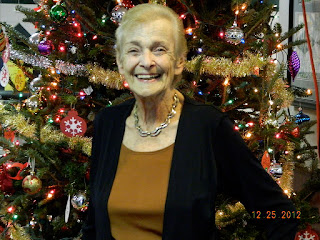 Looking forward to a wonderful New Year and wishing you the best! Audrey

Posted by Unknown at 3:14 PM No comments: 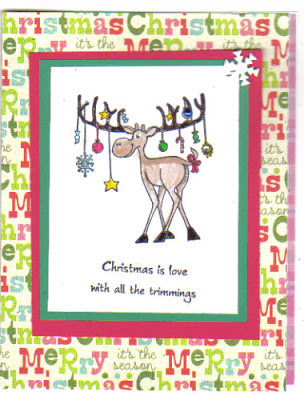 As the year is coming to an end, I look back at some of my disappointments, but most of all I have so many blessings that have happened to me this past year.
My disappointment is the fact that I haven't gotten a job, so I've decided to stop looking. The economy is terrible, and there are so many young people needing jobs, someone my age doesn't stand a chance.
Ah, but the blessings I have far outweigh  the disappointments.
Love of family has always been first on my list. My daughters have been by my side through thick and thin. Their phone calls lighten my day like a shimmering star.
Having true good friends who care about me is another blessing. I have also made new friends this year. While they live far away, our daily correspondence and interest in writing has given us a bond. Thank you both!
As for my writing, I was thrilled to win first place in the St. Augustine 450th essay contest. I have been lucky to have many of my stories published in “Dew On The Kudzu”. I write daily and I think my writing is improving. That's another blessing.
Above all, though, I am blessed to have my God who is always there, carrying me through the tough times.
My thoughts will be with all of you and I wish you a very blessed Christmas.

Posted by Unknown at 9:53 AM No comments: