Secrets In The Night - My Latest Novella

Available on Amazon and Kindle
Life is not always as it seems. Every family has its secrets and the darkness of night can’t hide the truths of the day. Moving between St. Augustine, Florida, and a horse ranch in Hickory Hill, Georgia, this sequel to The Wary Heart takes place five years later. Love that blossomed earlier has faded. Families struggle to keep together in an ever changing world. Secrets threaten to tear lives apart as new beginnings take hold. Everyone will be changed forever and no one can avoid the consequences. "Secrets in the Night" is a contemporary romance, chock full of mystery, crime and love. With the fast paced dialog Audrey Frank is known for, her characters become alive. With a sexy, rebellious teenager tempting Afghanistan veterans, a hooker trying to change her life, and the murder of rancher, there is plenty of action and romance.
I loved writing about the characters in this new collection of novellas. Look for Book Three coming soon. The horse ranch in Hickory Hill, Georgia, brings back memories of the ranch in upstate New York where we used to take the children when they were young.
If you read my books and like them, please leave reviews on Amazon! I also answer all e-mails and would enjoy hearing from my readers!
Audrey
Posted by Unknown at 2:28 PM No comments:

My Story "Simon" in The Florida Writer Magazine 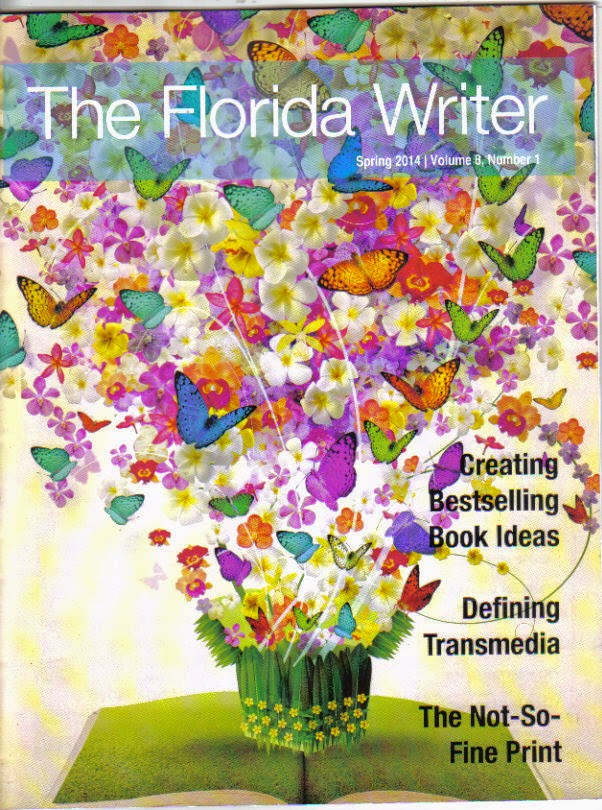 So pleased to have my story Simon published in  the Spring 2014 edition of The Florida Writer, the quarterly magazine put out by The Florida Writer's Association (FWA). For their section Paragraphs, writers are given a choice of three topics that play an integral part of the 600 word story.
Sharing my story below. Hope you will enjoy it.
Audrey
Simon
On the night of the full moon, Simon came into Regina Osborne's life. For a year since her husband's death she had lived aboard their thirty-six-foot cabin cruiser. She never took the boat out, but preferred living on the water. The other boaters would give her a casual nod and move on. Tonight was different.
She felt a presence close by and glanced around. A small boy leaned against a a nearby piling. His gaze fixed on her. His hair was scraggly, silver white like an Albino's. Dressed only in faded blue cutoffs he was way too thin.
Regina sucked in a deep breath when their eyes met. He seemed almost ethereal, his eyes light and transparent. “What's your name?”
“Simon.” His tone implied she should already know.
“How strange. My son's name was Simon.” A sudden sadness brought quick tears. “He died when he was eight year's old.”
An enigmatic smile played at the corners of his mouth. “I have to leave now, but I'll be back soon.”
She watched until he was out of sight.
That night Regina slept fitfully, haunted by a strange dream. Her husband and son were laughing, playing together. But something was wrong. The boy in her dream had silver-white hair, not brown like her son's. Yet Arthur hugged him as if he knew the child. They exploded into a kaleidoscope of colors and reached down to grab her. The three of them laughed as they catapulted toward luminescent clouds.
Higher and higher they flew until Regina felt dizzy. Suddenly her grasp slipped and she plummeted down through a dark void, unable to breathe. She tried to grab hold to stop the fall. Her fingers only tore against the ragged walls of black night.
“Wake up,” a voice whispered against her ear.
Regina bolted upright.
“Are you all right?” Simon stood staring at her, his eyes luminous in the glow of the brass lamp. The boy reached for her hand. “Let's go on deck.”
Regina followed, her heart beating wildly. What was it about Simon that seemed so familiar yet distant?
Simon eased himself into an adjoining chair. He steepled his small fingers. Brooding eyes met and held Regina's. “We must make a journey together. Someone out there is waiting for us.”
Regina pressed her hands against her forehead. A migraine was forming. She looked up, her eyes daring Simon. “Get off this boat and never come back.”
There was a calmness on the boy's face. “I can't do that. I've come too far in my journey.” He held out his hand. “Give them to me, please.”
As though mesmerized by his voice, Regina reached into her pocket and drew out a set of silver keys. With glassy eyes she watched Simon insert them into the ignition.
Simon beckoned to her. “You start the engines while I cast off.” He scrambled to untie the lines.
Trance-like, Regina turned the keys. First one engine, then the other roared to life thunderously,   then throttled down to a steady bass hum. The cruiser pitched and rolled against the turbulence of a sudden storm that descended from nowhere, like a great hunching beast.
Simon climbed onto the bridge seat. “Are you ready?”
Regina stiffened. “Yes.” It was barely a whisper against the blasting wind.
Simon slowly eased the throttles forward.
The boat moved out of the slip and headed north toward the open sea.
Posted by Unknown at 11:52 PM 1 comment: