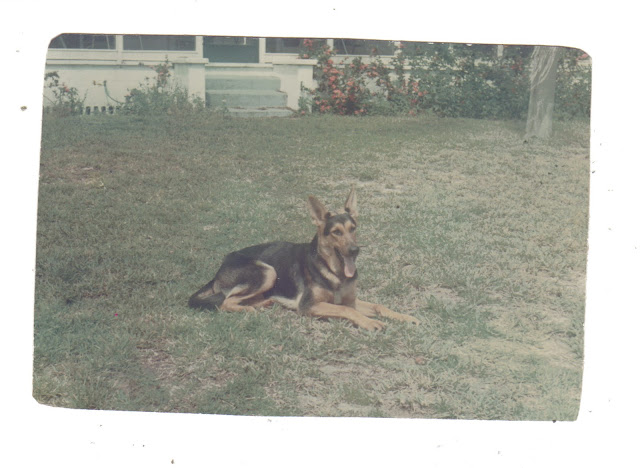 Our German Shepherd, Fang, was an extremely intelligent dog. She came to us as a puppy and seemed to immediately understand and obey our commands. At age seven she developed heart worms. Back then it was a death sentence.
It was heartbreaking to watch the once animated animal slowly succumb to the disease. My husband was away and I had just come home from work one afternoon.
“Hey, Fang, where are you girl?”
When she didn't respond, I checked out the back door. She had died under the bushes. I immediately called our vet and asked him what to do.
“If you bring her here, we'll handle the rest.”
Okay, just get her in the car and they'd take care of the body. Easier said than done. Fang weighed about eighty pounds.
I drove around to the back fence and opened the gate. My neighbor and his friend were outside chatting. Surely they'd help me with Fang. Unfortunately, they were far enough away to not see the dead dog.
I went inside and grabbed a sheet from the linen closet. By the time I had her wrapped in it, it looked like I was hauling a dead body, not a dog. I opened the two back doors to the car and started pushing and shoving Fang toward them.
Did the two men ever look my way? No sir. They were too embroiled in some kind of heated conversation. I didn't want to interrupt, so I just kept pushing.
When I finally got her to the car the biggest challenge was ahead – lifting her onto the back seat. A little push from the left side. A big pull from the right. Back to the left, then to the right, I heaved and hauled until I finally had her on the back seat. I could hardly breathe.
Holy Mother of God, let me finish this without dying myself.
Huffing and puffing, I turned on the ignition and backed out into the road. The drive to the Vet seemed endless. Once there I had to haul her out by myself because the place had closed at seven o'clock. I just yanked on her back legs and she slid out easily. I hated leaving her by their back door, but it had taken me way too long to get there. I covered her body with the sheet. I'd call the vet in the morning to be sure they had found her, then make the necessary arrangements for her burial.
There were people strolling by. Didn't they wonder what was under the sheet? I could have killed my husband and dumped him there. Not one person looked my way.
That night, as I lay in bed, every muscle I had ached. I cried into my pillow because there was no one to comfort me. My husband would be back tomorrow but that didn't help me now.
Looking back over the years it seems ludicrous, even laughable, how little people comprehend what is right before their eyes.
Posted by Unknown at 7:14 AM No comments:

How Movies Shaped My Youth 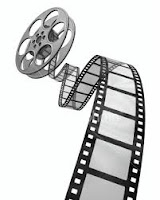 I grew up in a large two-story house. Off the kitchen was a small room which I used as a playhouse. It was actually the back entrance to the house. It was only about four feet square, but it was totally glassed in. There, alone, I let my imagination soar. I had a wild imagination!
Growing up, my Saturdays were always spent in the movie theater downtown. For twenty-five cents you got to see two movies. There was the feature movie and then a western. You didn't even have to leave when the movies were over. You could sit through them a second time. There, in the darkness, I began my fantasy life that I would play out in my small corner room of my house.
On clear days it became a trolley car and I was the conductor. I had an old wind up phonograph player and I would pretend the handle was the pump that the conductor used to steer the trolley. I would let passengers on and off and carry on conversations with my imaginary people.
More than once my mother would call out from the kitchen, “Did you say something, Audrey?”
“No.” I'd quickly yell back. I didn't want her to come and check on me. She would have thought it was silly and I didn't want any intrusion into my private world.
I loved rainy days. As the wind pelted drops against the windows, I stood at the helm of my ship crashing through twenty foot waves. It was up to me to get through the storm safely.
“Don't worry, men,” I'd call out bravely. “I'll see us to safety.”
Sometimes I'd line up my tin soldiers on the window ledge and have my own Charge of the Light Brigade.
Every time I went to the movies I came home and played the part of the hero. I was Tarzan flying through the trees, Mr. Christian battling the evil Captain Bligh. I was Kid Galahad, a boxer who won against all odds.
Only a four foot square room off the kitchen? Nonsense, it was my flying carpet to a world I only saw in the movies.
What kind of play was this for a girl? What about dolls and feminine things? Phooey. From the time I saw my first movie I was convinced boys had all the fun. I wanted to be the swash-buckling, sword-wielding hero, not the damsel in distress.
Well, you get the idea. I was less than thrilled at being a girl. I think my father unknowingly helped. He had wanted a son and, although he loved me, he kept bringing home all these wondrous boy toys.
I mean, if you're handed a toy rifle, why not be a cowboy? I remember I'd sneak a shot glass out of the kitchen, fill it with Coke, then down it after I'd shot the bad guy. All movie cowboys had their shot of whiskey after a fight Could I do less? I had to be true to my hero.
The toy trucks and cars Dad brought home were used to transport dirt and build an outdoor city. I built roads way in the back of the garden so my cars could travel. I had a railroad track and trains that hauled stuff around. Actually, I think all that imagining eventually made me a better, more interesting woman.
When did I realize I liked being a female? My first kiss convinced me. I eventually met my future husband and happily raised three wonderful children.
All this happened before cell phones, twittering and Face Book took over. My kids learned how to amuse themselves. I also think that made them more interesting adults.

Posted by Unknown at 8:47 AM No comments:

My latest story published on Dew On The Kudzu an online site for Southern writers. Find my other pieces by checking the link on the blog sidebar to the right and click on the Dew image.