Getting Ready For Halloween 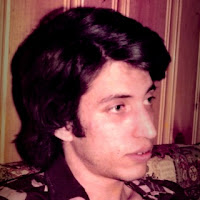 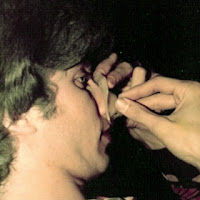 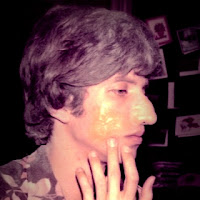 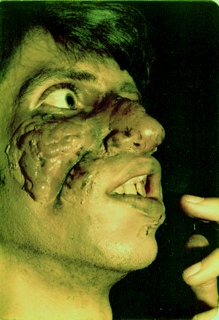 Night had almost descended. Lights were on by every porch, waiting for the little children who would knock on the door yelling “Trick or Treat”. Dressed in fanciful costumes, clinging to their bag of goodies, they laughed and giggled as they went from house to house.
When they got to our place, they were going to be tricked before treated. My teenage son, Steve, loved Halloween, but he had a wicked sense of humor and spent hours preparing for the children to arrive.
One year he purchased a “monster kit” containing putty and various other items that he plastered to his face and nose. Watching his transformation from human to monster was fascinating to my daughters and me.
Still, he wasn't satisfied. One more thing was needed.
He took soapy water and splashed it in his eyes until they were so bloodshot he could barely see. Plastic fangs completed his black outfit. When he partially opened the door he would let out this howl. Talk about shocked children. They didn't know whether to cry or just run away.
Steve would immediately open the door wide and laugh.
“Gotcha, didn't I?”
The giggles and laughter would return as Steve filled their bags with several kinds of candy. By the time the last goblin or princess left, Steve's eyes were almost back to normal, much to my relief.
One year he decided to try something different. He convinced the local movie theater to rent a coffin to be placed in the lobby. Dressed as Dracula, he laid in the coffin quietly, arms crossed on his chest. The minute he heard footsteps on the padded floor, he would rise slowly, bare his fangs and howl. On that one night he was Dracula. The startled movie goers would gasp, then delightedly laugh. Candy and drink sales soared, making the manager one happy man.
Steve's pay? He and his friends got to see free movies.
Looking back to those days I still smile at my son's antics. 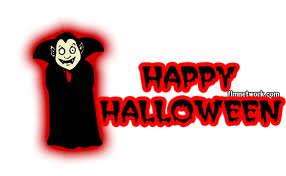 Happy Halloween to all!

"Haunted" a winner in the Share Your St. Augustine Story Contest! 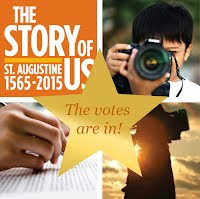 Congratulations to the Share Your St. Augustine Story Contest Winners

"St. Augustine has its fair share of stories to tell. In fact, it has nearly 450 years worth of stories to tell. So, The St. Augustine Record and the St. Augustine 450th Commemoration decided to capture some of those stories to provide everyone with unique and interesting perspectives of our city. More than 170 entries were submitted in the contest. The top five entries in each category – photo, essay and video – were selected by a panel of judges and posted online for people to vote for their favorite St. Augustine story. More than 675 people participated in the voting process. The votes have been tallied, and here are the results, including a tie for the grand prize!"


To view the winners in all categories click on this link and scroll down to see the winning photos, videos, and essays. I am excited to share first place with Russell Thomas! Thanks to all who voted. Below is my essay. Audrey

They say the town is haunted. Ghost tours let tourists mingle with the history of the oldest city. Do spirits still frequent the darkened streets? St. Augustine obsessed me since my first visit in 1947, when I honeymooned here as a new bride. It never left my soul. Widowed at sixty, I had my own ghosts to deal with. The memory of St. Augustine beckoned to me like an offshore siren. Dare I move to the city of my dreams? I packed my bags and began my life in a town that celebrates its past and looks toward the future. Twenty-four years later it still enchants me. The city has changed over the years, but my love of it will go with me to my grave. I won't be gone for good. My spirit will join the others and we'll watch the tourists look for ghosts.
Posted by Unknown at 8:02 PM 1 comment: