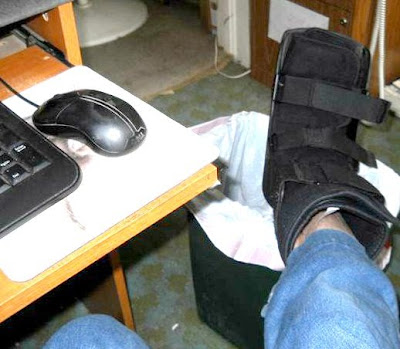 
Just when I had hope my foot was healing, I had a bad setback. It was my own fault – I actually forgot the foot was still broken. Since I wasn’t having any pain, I began to move around more freely. No more going up and down stairs on my backside. I just started walking up and down. Since daughter Barbara was coming down for a quickie visit, I washed sheets, made the bed, mopped the bathroom floor. When both Pam and Barbara were here, I ran around like a crazy fool, happiness in my heart. Well, now I’m paying for it.


Overnight my foot swelled, the pain became intense. Back to the doctor. X-rays showed I had “flattened” the bone to the point that it became a secondary break. Doctor’s orders, no walking for two weeks. All I can do is keep my foot elevated. For the first day I was very obedient, but then it struck me – I wanted to use my computer to write and still keep the foot elevated. My solution was simple. I just propped it on the wastebasket nest to the computer.


So now I’m still obeying doctor’s orders with the satisfaction of being able to write again!


Note: I sent the photo to my friend Jane and this was her response with a little graphic to go with it.


You are a very clever lady! Four sayings come to mind:
1. Necessity is the mother of invention.
2.Where there's a will, there's a way!
3.Winston Churchill says: Attitude is a little thing that can make a big difference.
4.When you come to the end of your rope, tie a knot and hang on. 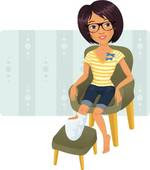 Music In My Life 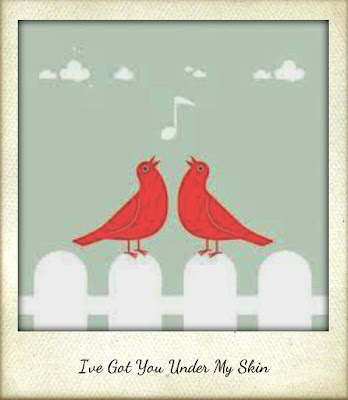 I'm not sure why, but I thought a lot about my husband today. Probably because I'm cooped up alone with a broken foot. I was remembering how much music meant to my life. Music touched my heart every time I felt emotion. If nothing else, I was a romantic.
On the first real date I had with my future husband, I should have realized that I was not dating a romantic. We went to a small restaurant in New York City where they had dancing. At one point, as we were dancing, I started to softly sing into his ear, “I've got you under my skin.”
He pushed me slightly back, looked down on me and asked, “You got Cooties?”
Right then and there I should have realized ours would be a marriage of fidelity and unspoken words of romance. He was a marvelously unromantic husband.
For our thirtieth anniversary, I wanted to tell him what those years meant to me. Kenny Rogers had just put out a new cassette. I played it until I came to the song “Through The Years.” I put it secretly in his car cassette. It would be the first song he'd hear on his way to work. I couldn't wait for him to listen to the words. He would know how much I loved him.
That evening when he got home I asked him what he thought of the song.
His answer? “That guy's got a really good voice.” No mention of the particular song I had chosen. What do you do with a guy like that? You love him and know he loves you even if he never says so. 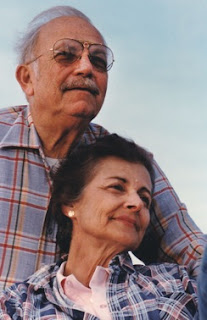 Posted by Unknown at 9:47 PM No comments: