If It's Gonna Happen, It'll Happen To Me

I decided to put gas in my car today, since prices were down a few cents. Why not take advantage? I turned off the engine, and got out my debit card. I don't know how it happened so quickly, but it slipped off my lap and slid down between the two front seats.
I could see it, but couldn't get to it. Went inside the store, explained what had happened and asked the girl there if she had something long that I could squeeze the card out with. It didn't work so I went back to the store and returned this sliver of metal to her.
Okay, let's see if I can get my hand down there and pluck it out. It was a tight squeeze and after three tries I realized my right hand was bloody – I mean blood was oozing all over the place. The cuts weren't deep, but my blood is so thin and, of course, so is my skin. I'll admit I started to panic. You can't buy anything without one of those plastic cards and I only have that one and no cash on hand. I don't like credit cards because sometimes they can get out of hand. If I don't have the money I just stop spending. I took out a paper towel, wrapped it around the cuts which kept oozing blood, so for the third time I headed back inside.
The clerk looked horrified at the bloody towel. I told her not to worry but wondered if there was someone with thicker skin who could get the card out. She was the only one in the store and couldn't leave. Then a young man in a UPS uniform walked in. He looked as horrified as the clerk. Really, it wasn't as bad as it looked. I just needed someone to try and pluck out the card. He was very tall and thin with long slim fingers. Maybe he could get it out?
Well, it took him two seconds to reach the card and hand it to me. Like I said, the cuts weren't deep but my hand is black tonight. No pain, just ugly looking.
There are some nice people in this world and lately I've been running into them. 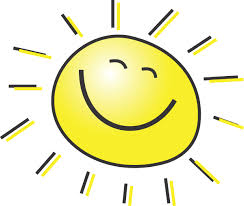 "Trouble On The Reef" published in Stepping Stones Magazine

Stepping Stones Magazine is web-based journal showcasing poetry, short fiction, visual and audio art by artists of all skill levels. Whether you’re an author, who publishes regularly, or new to the craft, this is the place for you. Our address is: http://ssmalmia.com

While Stepping Stones strives to be a place for new and established artists to experiment with their craft, acceptance is not automatic. If your work appears in our magazine, then it deserves to be here. 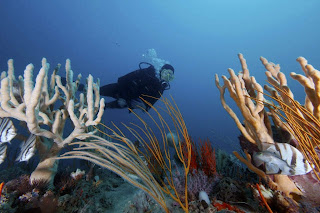 Trouble On The Reef by Audrey Frank published in Stepping Stones Magazine.


I was pleased that my story Trouble On The Reef was published in Stepping Stones Magazine, an on-line magazine. You can link to the story and read it by clicking HERE or on the story title under the photo. If you like my story, please click on the stars and register a five star vote!
Posted by Unknown at 6:58 PM No comments: 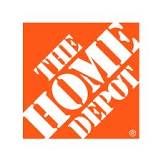 With all the chaos going around in this world, I found my personal angel yesterday.
Someone had driven by and ripped off my left outside rear mirror a few months ago. My neighbor had fixed it back then, but with the scorching heat we're having now, the tape melted away. The mirror was hanging by a thread. My neighbor was out of town. What to do?
I headed to Home Depot and purchased some heavy duty glue and extra strength duck tape. My plans were to try and fix it right there in the parking lot. I couldn't open the glue, so back inside I went. A very young employee was standing just inside the door.
“Could you please open this glue for me?”
“Be happy to,” he replied. Then he looked at me.”You gonna use it right now?”
I explained what had happened and he said he'd see if he could help me out. Off to the car we went.
That young man, Scott, took over completely. He put on the glue, waited until he felt it was dry and then meticulously kept adding duck tape until he was satisfied that the mirror was going to hold. We were out there for over a half hour. Another person might have just given him a few dollars and driven off. I felt Scott deserved more than that.
“Can you take me to your manager? I want to tell him how helpful you were.”
Scott grinned. “Yes, mam!”
As I told the manager about the incident, he started to smile and Scott was turning red.
“If the world were filled with more young people like Scott, it would be a better place to
live” I ended.
The manager shook my hand and said “Most people just come to me with complaints, never praise. Thank you for taking the time to tell me about Scott.”
Before I walked away, I reached up and hugged Scott. “Just want you to know you made my day.”
I've been telling my friends to ask for Scott when they go to Home Depot. One day I want to see him as manager of the store.
Posted by Unknown at 9:48 AM No comments:

The Days Of Wine And Flowers 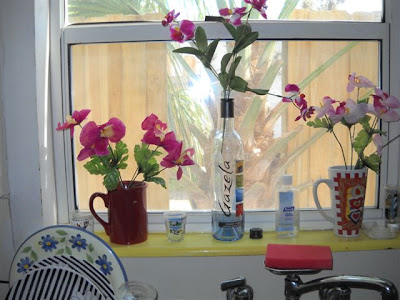 ﻿
Finally Spring has sprung here in St. Augustine after a very cold winter. Trees are filling in with new green leaves - let's not mention all the dead leaves on the ground because I was too lazy to rake them up - Azaleas are blooming, and my heart is filled with the thought of the summer ahead and all the annuals I plan to set out in pots in the back yard.
I hadn't started out to the grocery store with the thought of buying a bottle of wine. I am not a wine drinker. Still, there was this beautiful bottle of rose wine that caught my attention. Not the wine. The bottle - it had such a quaint design on it that I added it to my grocery cart on the spur of the moment.
I got home, looked at the bottle and decided to pour out the wine and use it as a vase on my kitchen window sill. It didn't look that great until I added a few artificial flowers in it and surrounding it. Okay, I cheated. I didn't want to wait until I could get some fresh flowers. So now my window sill pleases me. And if I never get fresh flowers instead of artificial, I still think it looks cute.
Posted by Unknown at 9:01 PM No comments: