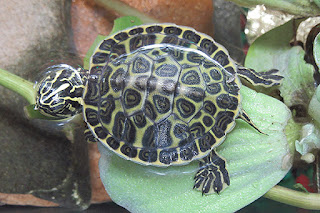 Well let me be the first to join your blog. I have 8 baby yellow belly slider turtles. A few months ago my husband and I saw a large female turtle laying her eggs in our yard. Since we have often seen broken turtle eggs we know that the raccoons love to eat them. We covered the area with a large piece of plywood to keep them safe.

About 3 months later I decided to check on the nest. I very carefully dug into the dirt and there was a little face looking up at me, still in his egg! We put him in a small container with water and out he came with yolk sack still   attached. I didn't know if he would live, but in seconds another one came out.
I started digging again and found whole eggs. Some were shriveled up, some felt empty, but by the time I finished I had found 6 more viable eggs. To better keep an eye on them I put them in a bucket with enough dirt to keep them covered and moved them to our screened in porch.
For the next week, every morning I was greeted with another little turtle sitting on top of the dirt. It was great fun to wake up and wonder if another little turtle had joined the world! They all made it and I am a proud mother of eight ravenous baby turtles.
Another three months have passed and I can’t believe how they have grown. Feeding time is the proverbial frenzy. They have learned to come to one end of the thirty gallon tank when I approach at our regular feeding time. They climb all over each other and have a contest to see who can eat the most and the fastest. In the beginning I had to place them in shallow water and put the food right in front of them to get them to eat. Now they can swim all over the tank to catch floating tidbits that swirl in the current created by the filter. Their menu consists of shrimp, mealy worms and kale.
I don’t know how long I will be able to keep them. I will have to release them back to nature because they will grow to large to keep. But for now, they are great fun to watch
Pam King
www.pdkingdesign.com 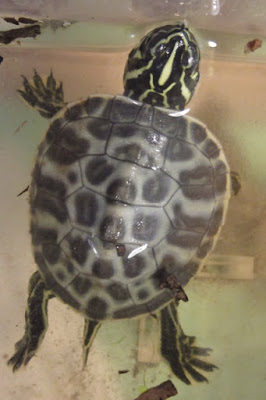 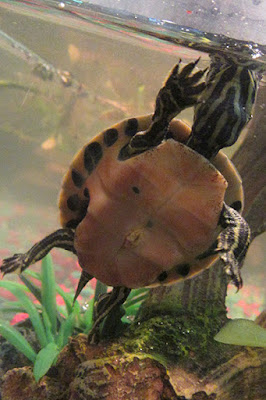